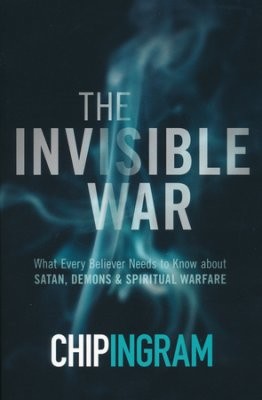 The Invisible War: What Every Believer Needs to Know About Satan, Demons, and Spiritual Warfare

Learn to See What Lies Below the Surface

Beneath our tangible landscape lurks an invisible spiritual realm where unseen battles rage. It's real. And it's dangerous. If you're prepared to remove the blinders and gaze into the unseen world, Chip Ingram is ready to take you there.
Hang on to your seat. It's going to be a journey inside the very folds of our Bibles, a journey that will teach us about our greatest foe, Satan, also known as Lucifer, Dragon, Serpent, and Son of the Morning Star. Although this lying thief comes to "steal,kill and destroy," God details in His Word the battle plan to uncover Satan's cunning deceptions and to resist his sinister schemes.

The cosmic conflict exploding all around us will have eternal implications, for us and those we love. In this series you will be prepared to do spiritual battle with the enemy of your soul ... and win! You'll learn to clothe yourself with God's "spiritual armor" so you can be confident your certain victory over the scheming enemy.

This series includes the following messages:

What is the Invisible War?
Who are We Fighting?<
Four Keys to Spiritual Victory
How to Prepare Yourself for Spiritual Battle
Engaging the Enemy
Winning the War
The Christian's Secret Weapon
The Ministry of Deliverance
DVD Series is excerpts of the original broadcast suitable for Bible Study. Each of the eight sessions are approximately 30 minutes.